I don’t usually spend time on product reviews or the hype around new products, but this one caught my eye – the release of ON1’s latest software and a new service called ON1 360.

One of the most frustrating aspects of photography for me has been the inability to manage and edit photographs on a variety of platforms, when and where it was convenient for me.

Desktops are becoming more and more powerful, but who wants to sit in front of one for the day.  In this age of needing minor pleasures, it would be awesome to be able to manage and edit my photographs on my patio, with a cold drink beside me.  My iPad has more than enough capability to do that – it just needed the tools.

Adobe recognized that a couple years ago and began to introduce products that were either completely web-based or that sync’d information from desktop to web.  Their Lightroom software comes in 3 flavours currently:  a fully desktop “classic” version, a hybrid app that sits on the hard drive but manages all content exclusively in the cloud, and a web-based version that has both software and content online.

Companion products to this include mobile versions for pretty much every device – certainly for Android, iOS, whether on phone or tablet.

Like any other new concept, there were and are growing pains with Adobe’s offering, not the least of which is that to use the hybrid, web or mobile versions of Lightroom, all content must be stored in the cloud.  And the relationship between the different flavours of software is not seamless – requiring you to think ahead about how you want to organize your images and how much you are willing to spend on cloud services.  This stems from Adobe’s practice of trying to keep things familiar for long-standing users, while at the same time being innovative and appealing to a younger crowd very used to working and living online.

ON1 has been nipping on the heels of Adobe for a while, and this week released its next offering:  ON1 360.  It consists of a desktop app, mobile app and sync service that allows information on edits and adjustments to flow between the apps.  The difference between this offering and Adobe’s is that all content does not reside in the cloud.  Instead, users identify which files they want to share between the apps, either by placing them in albums or in folders and then designating those entities as shared via the 360 service.

All original files remain where they were originally stored (although ON1 does also offer the option of storing all original image files in the cloud), but to save bandwidth and cost, the service will create a tiny reference image that will flow between the two apps and be the “index” against which image edits are stored.  This reference image also provides you with a visual confirmation of your edits – and looks exactly the same as it would if you were working with the 40 megapixel raw file in front of you.  It’s amazing.  The same edit engine resides in both the desktop and mobile apps, making editing seamless and familiar.

What this means is that you can “store” up to 35,000 images through their 200 GB storage option.  Insane!  Software and the sync service cost about $90 USD per year, but you also don’t have to upgrade the software every year once you buy the version that has the sync service included.

If like me, you were previously storing your original images on a cloud service like Dropbox or OneDrive, not for backup but to make them available on more than one device, you will save even more money by cancelling those services.  And you won’t have the burden of storing that second copy.  But even if you use cloud services for backup, you have the option of moving all of your original images to ON1 servers, cancelling the other plans and freeing up hard drive/device space by having only the reference images stored locally.  It’s a practice that Apple has leveraged for their phones for a long time.  I really really like all the options ON1 has provided. 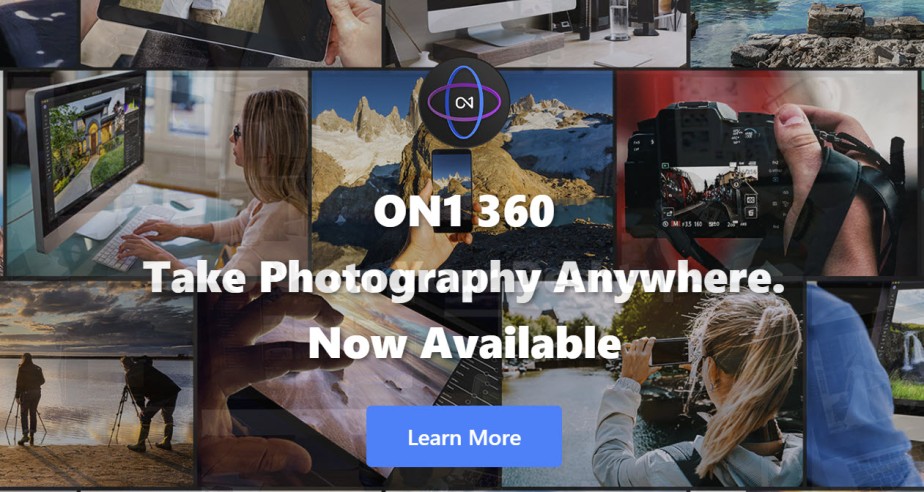 The latest software and new service were released on Jun 29, so I’ve only had a couple of days to play with them.  A while ago, I had stepped back from ON1 after initially being a big fan.  This was because of a software glitch that kept kicking me out of my active edit.  They have fixed that, improved the speed and features of the software, added some really neat presets/looks/filters.  This product is maturing really really nicely.  So, once again, in my effort to find the perfect workflow, I’ve now settled on ON1 for import, management and initial edits, and Photoshop (which also now has a mobile version) for more complex finishing touches.  Any other third party app will be accessed from Photoshop.  We will see if eventually Photoshop slips out of the mix as I come to rely more and more on the maturing software of ON1.

As part of their offering, the mobile app is also a camera app, with features to allow you to capture images just as you would on any standalone camera.  The mobile app can be used on its own, but it is also a great enticement to future users to maybe expand into full image editing on a seamless platform later.  Good on you, ON1.

I’m looking forward to a seamless experience (have I said how important “seamless” is to me?), but as with any new product, I won’t be totally alarmed if it’s not right away.  It’s very promising though that I have been smiling since I launched it on my main computer, laptop, iPad and iPhone on the 29th.  All my tech is talking to each other, so far “seamlessly”.  Did I say “insane”!

I have a penchant for supporting smaller companies and I’m really looking forward to becoming a faithful advocate for this software and ecosystem.  I’m very impressed with where they are today, and think you will be too.  Give them a try.

And no, I’m not sponsored or paid for this endorsement.  Just in case that matters.